How to do research in biology (and other sciences)

Once you've searched a databases using your strategic keywords, you may need to refine your results even further to get to the most appropriate materials.

Instead of thinking about sources in terms of "good" and "bad" think of them in terms of relevance to your research needs. What are some criteria you should think about when determining what is relevant to your need?

Does the publication date matter to your topic? If you need to look at the most recent research on a topic, limit the results to the last 5 years. Sometimes, though, it is useful to see older materials to see how research, ideas, or results have changed over time.

Should it be peer-reviewed?

For most academic research, you need to find peer-reviewed materials. Peer-review is an agreed upon indicator of quality, valid, and original research. So, yes, focus your search on peer-reviewed materials. In EBSCO databases, there is a Peer-Review limiter on the left-hand side of the results. What is peer-review? Click over to the Reliability and Reputability tab to watch a short video explanation!

The video below is a quick demonstration on how to narrow your search results to Peer-Reviewed materials in QuickSearch and any of our Ebsco databases.

Note: The actual tools to refine the results are different depending on the database. If you need help figuring out how to refine results in a particular database, contact a librarian!

Oh great, you can limit to full-text only articles! Although it is convenient, it is not best practice to do so. SHU Library has access to materials across a wide variety of databases. So what is not available in one, may be available in another. Go to Full-text Options to find out more about what resources are available to you!

You might be wondering if you even know what a scholarly article looks like. How are you supposed to know if you've never seen one? To figure out what a scholarly article is, it is good to start by comparing it to something with which you are already familiar: popular articles. You might not read actual glossy magazines, but think of Teen VOGUE, Men's Health, Time or the Economist, any of the titles pictured above. Popular and scholarly resources have certain characteristics that help you tell the difference between them. See the table below.

What is an academic journal?

Published, scholarly information comes in a variety of packages, but the most dominant form overall is the research article, which is published in an academic journal.

An academic journal is a serialized publication, like a magazine or newspaper, though they are often published with less frequency like only once a year! Typically academic journals are published annually, quarterly, bimonthly, or monthly. They are published by places like university presses, academic societies, or commercial publishers. Most have a specific disciplinary focus, such as modern history, astrophysics, or French literature, and the primary audience for these publications will be students and researchers in those disciplinary areas.

Let's look at an example of a scholarly journal! 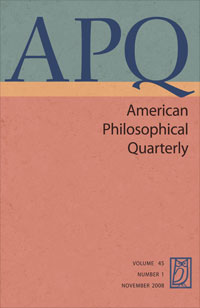 This is the journal American Philosophical Quarterly (APQ). It's an academic journal published four times per year.

What if you found some research articles outside of a database, like through a Google Scholar search? How can you tell if something like that is peer-reviewed?

Many scientists evaluate journal reputability by checking the Impact Factor/ISI Journal Citation Reports Ranking. Most journals will list these numbers on their website. A low Impact Factor (IF) does not necessarily mean that the journal is not reputable. Impact Factors tend to be lower the more discipline or field-specific the journal is because its intended audience is smaller. For example, many of the top marine ecology journals have IFs of 2.5 to 3.5 simply because they are specific to a relatively small field. The top general ecology journals have IFs of 3.5 to 15. High Impact Factor journals (20+) tend not to be field-specific.

What is the article's impact on the field?